We are now in the time of winter, where snow is beginning to be upon us, but the folk are safe indoors happily enjoying the fruits of their fall harvest. For the peoples of Scandanavia, this time not only was full of darkness, cold, and snow, but also marked the beginning of the sacred year and a celebration that life had not left this world. It is for this reason that evergreens and holly become common decorations in our homes and in our rites.

For Stone Creed Grove, this is the most important rite celebrated in the Norse style, honoring the sibling gods Frey and Freya who have long acted as patrons of our folk. We also give special due to many other important Norse gods, including Thor, Odin, Heimdal, and Frigga.

Our Yule celebrations also fulfill many of the roles of other modern holidays around this time. There are exchanges of gifts, group singing, and an opportunity to make promises of what will be done in the next year.

Video of a Yule Ritual 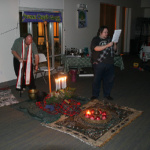 Presents Under the Tree

The Hallows
The post-ritual Grove hallows.

Burning the Yule Log
The Yule-log is placed in the fire.

Burning the Yule Log
The Yule-log is placed in the fire.

Ending the Rite
The horn is blown signaling the end of the rite.

The Blessing
Water and Ale are blessed for the Grove to partake.

The Boar's Head
The Boar's head is passed around and oaths are taken by the congregation.

Honoring the Deities
The nine candles of the Yule log are lit, one each to honor a certain deity.

Honoring the Hallows
Offerings are made to fire, well and tree.

The Hammer Rite
Madoc preforms the Hammer rite to hallow the grove.

The Hallows
The pre-ritual grove hallows

Burning the Yule Log
See the Blazing Yule before us!

A.J. Wearing Horns
Is it AJ Claus or Santa Gooch?

Closing the Gates
Assured of the return of the Sun, we thank Heimdall and watch the Rainbow Bridge and our Grove fade away 'til next time...

Opening the Gates
The Rainbow Bridge is visualized emanating to and from all directions as we ask Heimdall to open the ways between.

Offering to Odin
Boris performs an invocation of Bardic Inspiration, in this case to Odin.

Pre-ritual Meditation
As in all our rites, the congregation is guided through a grounding and centering.

The Omen
The Yule 2003 Omen for StoneCreed Grove, ADF.

Blessing a Child
A recent addition to a family is always cause for celebration, young Anakin (of Willow and Taliesen) is sained at his first Yule.

The Hammer Rite
Soon, with enough practice, young Madoc will be able to wield the Thor's Hammer all by himself.

Burning the Yule Log
Finally, the Yule log is placed in the fire. Charred pieces of the Yule log are proof against lightning and storms destroying the crops, and kindling next years fire from charred Yule log is most auspicious.

The Folk
Another third.

The Folk
One third of the congregation.

Offering to Heimdall
Heimdall was offered to as the Gatekeeper by Ian & Liafal.

The Hallows
The Grove Hallows for Yule 2003 (our fifteenth).

The Yule Log
See the blazing Yule before us...

Yule Carol Singing
Our Yule festivities would not be complete without the usual wassailing and singing.

A Play
This years StoneCreed Mummers prepare to take the stage.

Lining up for gifts
Plenty of gifts for plenty of kids. No pushing or shoving anyone - there's enough for everyone.

The Omen
The Yule 2002 Omen for StoneCreed Grove, ADF.

The Folk During the Rite
Being a Norse Rite, there was plenty of Frith in our cozy feasting hall. It was easy to forget the softly falling snow outside.

The Yule Log
See the blazing Yule before us...

The Folk Dancing
Our festive Yule would not be complete without a little dancing led by Steph and Ian.

Playing the Harp
Strike the Harp...

The Omen
The StoneCreed Grove Omen for Yule.

Offerings to the deities
The Gods were invited to our feast, and received the first portion. Backlit e-book readers (Palm Pilots) were on hand to follow the rite even in total darkness.

The Hallows
Deck the halls with... pine roping, a rosemary bush and nine candles for the Aesir.

Kids at ritual
Kidz love us! (Despite this young mans scowling countenance...)

The Folk Dancing
We threatened you with dancing... This was a step to the right & then left a bunch of times with a kick-kick-kick thrown in at the end of the measure.

At the time of the spring equinox, the land is in the season of early planting. The sun is now back to being present the majority of the time, the

This script is not generally performed in its original form, but provides an effective guide for the standard structure of Stone Creed Grove ritual. Feel free to adapt this standard

At Midsummer, we now have the world in full bloom. The early harvests of the year are starting to come back into the larder, the animals are busy fattening up